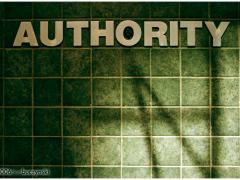 Power and authority are separate but related concepts. A manager in an organization has authority if he or she has the right to direct the activities of others and expect them to respond with appropriate actions to attain organizational purposes. Authority most often comes from the duties and responsibilities delegated to a position holder in a bureaucratic structure. A company president can order a product design change, for instance, or a police officer has the authority to arrest an offender of the law.

Power is the possession of authority, control, or influence by which a person influences the actions of others, either by direct authority or by some other, more intangible means. A prime source of power is the possession of knowledge. A person with knowledge is oftentimes able to use that knowledge to directly or indirectly influence the actions of others. The authority of knowledge is often independent of levels or positions. Power can reinforce authority, and authority is one of the primary sources of power.

Photo by macwagen / CC BY http://creativecommons.org/licenses/by/2.0/